Summer’s gone and dribbles of rain have wet the ground a few times. It’s been an almost fish-less year for me. That may change with an end-of-the-season trip after the first of November, but in the meantime I’ll remain a bit cranky.

That’s not to say I haven’t been busy with tangential fishing endeavors. By the end of this month the move of two fly fishing club websites to new online platforms should be finished, and my involvement will taper off from full-time developer/designer to part-time consultant. I’ve also busied myself with experiments in online learning, recreational shooting and a personal goal of walking 5 miles daily. It’s become difficult to remember how fishing could fit into my schedule.

Last weekend it was neighborly curiosity that had Karen and me traipsing through a home across the street and a houses up. The residents weren’t people with whom we had wanted to acquaint ourselves. The house was now vacant and an estate sale planned for Saturday.

In the world of estate and garage sales, every minute counts; but we had things to do and arrived about an hour late. There weren’t too many items of interest, though a nice rolling tool cabinet and couple decent pieces of furniture were tagged as sold.

I’m not a picker by any stretch of the imagination and generally won’t dig through a pile of junk hoping for a gem. But walking through the garage my attention was drawn to a few rods tucked into a corner.

It was the usual collection of rods bought on the spur of the moment: a mix of spinning and bait casting rods and nothing remarkable. The same could be said of the reels, with one exception tucked behind the others. A fly reel attached to a medium saltwater spinning rod.

Two years ago I purchased an unbranded bamboo rod at the club auction for minimal money and since had been looking for a reel that might match the rod’s patina and pedigree. At first glance, this reel would fit the bill. I offered $5, mumbling that it was the reel I was interested in, but that I’d do them a favor by taking the rod off their hands as well. The deal was sealed and money changed hands. 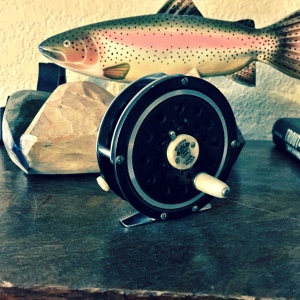 The rod cleaned up well enough to keep for the occasional misstep outside of fly fishing. The reel was in decent shape and only required wiping some dust and cobwebs away, which revealed it was a Pflueger Medalist 1495, a solid reel that I suspected might work well enough on the so-far-unused bamboo rod. But it was set up for left-hand retrieve, and I don’t do left-hand retrieve.

The Internets quickly offered up enough knowledge to indicate that I could set it up for right-hand retrieve. With a few tools and decent instructions the reel was soon in pieces. Maybe it’s nostalgia, but I admired its construction and relatively simple design — a more elegant reel from a more civilized age.

Apparently I had found a left-hand retrieve only Medalist 1495, likely manufactured in the late 1950s or 1960s before Pflueger changed the drag plate to allow folks to reel with the “wrong hand,” apparently a “quite collectible” version of the Medalist.

You’ll find me looking for another $5 reel for that no-name bamboo rod.

There’s something wonderfully satisfying about the surprising fight-per-ounce ratio of a wild trout that is followed by a revelation of coloration more vivid than man might create. That’s doubly true when the wild fish is native.

There are purists who would dismiss the progeny of planted parents, but earlier this week, Mark Kautz raised an interesting thought about a possible decline of opportunities to catch wild trout on his Northern California Trout blog as the California Department of Fish & Wildlife’s stocking program shifts to triploid trout.

Shelving the wild vs. native fish discussion for a bit, if I can’t chase native trouts, I’m just as happy stalking their wild brethren. Wild trout are the reason I took up fly fishing. There comes a point in every fishing career that you develop an affinity for a style of fishing, or a species, and often both. It can happen unexpectedly and unconsciously.

With me it began on a little creek in the Walker River watershed, with a spinning rod and a size one spotted Panther Martin teardrop. The cookie-cutter planter rainbows are the standard fare downstream, but my recent rediscovery of the benefits of hiking a bit farther than most weekend warriors had convinced me that whacking through dense stands of cottonwood could be worth the effort.

Trout are one species that adhere to the adage that “life will find a way,” and there’s no better example that the wild fish that often can be found upstream of the ruts created by the DFW’s live-haul stocking trucks. That day it was a cast to riffles in the shade of streamside willows that introduced me to a sizeable wild trout, at least by my standards. Until then, my familiarity of trout with parr marks had been limited to fish measuring less than six inches; this one was about twelve inches long. That wild trout was my gateway fish to appreciation of native populations.

As Mark observed, it’s likely that many folks expect to stock their freezers with trout poundage with a value equal to the cost of a fishing license; perhaps by any means necessary and without knowledge of or concern about the toll on wild and/or native trout. Perhaps it’s fed by the illusion of self-sustenance, even if for only a few days each year. It’s just as likely those fish won’t be replaced as the DFW’s triploid trout — chosen in response to a legal action challenging its hatchery and stocking operations — can’t reproduce. In the long-run, this should be a good thing for California’s native fishes. (It should be noted that the California DFW hatchery system has been gearing up production of native fish for selected waters.)

Still, it’s hard not to wonder if meat fishing, especially in a state as populous as California, would decimate populations of wild fish that have gained a foothold where native fish don’t exist. Also, with California’s now minimal sustainable populations of native fish, it could eventually impact native fish without stronger enforcement of regulations. That, or we have to hope, as Mark alluded, that meat fisherman will be more inclined to drive a few miles to grab some steaks than clamber over rocks, descend into a canyon or even walk a few thousand feet upstream.

Thank you, Mark, for the thought-provoking discourse.