After we recovered from our day in the San Juan Islands, Eric proposed a hike to Barclay Lake, a less than 5 mile hike round trip into the western foothills of the Cascade Range. It’s a relatively easy hike, with an elevation gain of about 500 feet, into an area that has recovered from clear-cut logging. The trail follows Barclay Creek – a creek Mark and I fished last year to find numerous Westslope Cutthroat trout – much of the way and meanders through Douglas firs, western hemlocks, and red cedars, with floor maidenhair ferns, queen’s cup, salmonberry, bunchberry, and plenty of mushrooms. 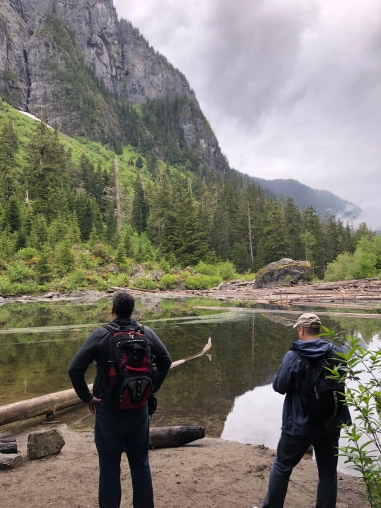 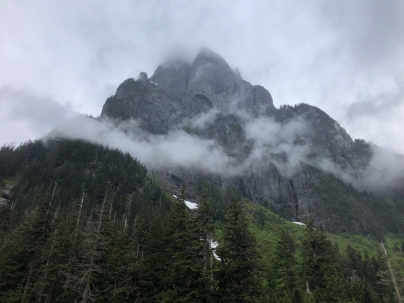 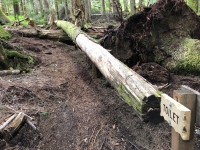 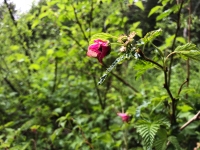 Finding willing wild fish in an unexplored small creek still brings out the kid in me; there’s unfettered excitment, a little bit of a booty dance (at least inside) and everything, no matter how inconsequential, adds to the splendor of the place.

It wasn’t easy going, and there were a few scrapes along the way, but we walked off that creek I won’t name happy that we took a chance on a stranger’s advice.

The younger brother and I were a bit at loose ends two Saturdays ago. We’d previously spent Thursday fishing a Skykomish River tributary with guide Derek Young and buddy Kirk, and Friday out again with Derek on and near the Snoqualmie River. We learned a lot and caught enough trout to feel a bit more confident on waters not too far from my brother’s house.

It didn’t take long for Mark to show symptoms of the addiction. Throwing out newly learned jargon, he suggested we do some ‘bluelining’ along the U.S. Route 2 (Steven’s Pass Highway) corridor. We were out the door and on the road with little clue where we might end up.

For the first 20 minutes or so, we pondered possibilities that were soon rendered unclear in the absence of a copy of the WDFW fishing regulations. Along this stretch of road there aren’t many places to pick up a copy of the regs. Then fate stepped in.

We’d come up on a wide spot in the road and a small, rustic store stocked with an odd collection of the types of goods that only campers might buy when lacking any other choices. The store owner, a bearded guy who looked the part in jeans and a plaid shirt, told me they didn’t have any fishing regulation booklets. He tries to keep a copy in the store for reference but it always seems to sprout legs and walk off.

It’s certain that I’m not the first to do this, but I carefully formed my response to include a mention of ‘fly fishing.’ And that, as has happened before, opened the door.

The store owner leaned a bit closer and I could swear he cast a conspiratorial glance right and left before saying, “Then I can give you the story on what’s going on ‘round here.” Mark walked up to the counter sometime during the description of a creek not too far away and a semi-concealed access point. Walking out the door, Mark and I agreed that if the payoff was as described, we’d return to buy a drink or something as a token of thanks.

After another 15 minutes of driving on a well-graded Forest Service road, we found the secondary road as described. At the end of it we purposely parked the truck out of view from the main road. Gearing up was expedited by the nearby sound of the creek, and perhaps more so by the buzzing of a large number of bees circling the flowering vegetation.

Dropping over a small berm, it was immediately apparent that moving up or down this creek would require a lot more wading. It was small creek, and it was clear that my 7-foot, 6-inch 3 wt. might be a bit too much rod for this water.

Less adventurous fisherman wouldn’t have ventured far either upstream or downstream on this creek. Unlike the water we fished the two prior days, this creek doesn’t get the flows necessary to soften the ragged edges of what is probably basalt. We scrambled over these rocks when we could, carefully climbed where able, and took more cautious routes when warranted.

We had no problem finding the fish. My biggest problem would be deciding whether or not to replace the yellow stimulator that would be battered and a shadow of itself by the end of the day. It’s a question I never really mind facing. (I never replaced it.)

The point at which we first saw the creek was a plunge pool that emptied into a wider, shallower pool interrupted by large rocks sprinkled throughout. I took the first pool while Mark edged along the bank downstream.

Within the first few casts we’d both elicited frenzied strikes. In that first pool I landed what would be the biggest cutthroat of the day, maybe close to 11 inches, a fish I believe my brother caught again near the end of our day. These trout were that hungry.

Younger brother with one of the bigger cutties of the day.

It wasn’t what might be called ‘crazy fishing.’ The average fish was seven to eight inches, but they set themselves apart from bigger fish I’ve caught with beautiful, though darker, coloration. And each pool, seam or eddy had to be rested once the first fish had been played in that section of water; sort of ‘stick-and-move’ fly fishing. The upside was the abundance of good-looking water.

I enjoyed pointing out promising pockets to Mark just as much as I think he did finding fish where he might not have expected. Frankly, I’m still amazed every time that happens.

We spent more than three hours enjoying some of the most strenuous fly fishing I’ve ever experienced in my short time in the sport. More prepared fly fisherman would have loaded a day pack with lunch and fished this creek all the way to its confluence with the South Fork of the Skykomish River. Maybe next time.

This time around we enjoyed a treat alongside the highway, at the store where this all began, quietly letting the day’s events burn into our memory.