Can’t help but wonder if we aren’t living at the peak of canned culinary delights… Just as Mr. Chandler over at The Trout Underground unwrapped the delicious details of The German-Built Canned Cheeseburger, the local press shines the front page spotlight on The Amazing Organic Batter Blaster (found at sfgate.com). Consider it the next evolutionary step of a good ol’ camping standby: Bisquick Shake ‘n’ Pour.  What could be more convincing that an online video?

Quick vittles is one holy grail of those fisherpeople who stretch the legal limits of fishing to that hour before the sun officials shines on this Golden State. And what could be better and more ‘Merican than a quick batch of stick-to-your-ribs flapjacks?

Maybe we’d better hope that the trout targeted this season don’t rise to the flies tied here at the House on the Hill. Already we’re beginning a battle the creeping curse that comes with fly tying.

A fly tying station is already headed out this way via the seemingly unstoppable United Parcel Service. But already predicted is a need for drawers to comfortably contain a quantity of synthetic and animal natural materials.

The curse is not the cause of worry. The worry is that already I have pondered uses from the dog’s fur left behind after a good trimming. Heck, I’ve even considered brushing the house bunny…might make decent dubbing or even a hackle.

It’s not an obsession, it’s a hobby.

Global warming is upon us.

Snow becoming a regular and multi-day occurrence on the mountains within sight of the San Francisco Bay. The Arctic loosing ice cover, which in melting is decreasing the salinity of the far northern oceans. But doggone it, doesn’t seem like temperatures are rising. It’s darn cold out there this winter. 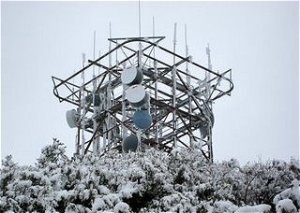 For 23 days now long pants have covered my funky but functional legs during some part of the day. Shorts, long a mainstay of my wardrobe save for a handful of days during past year, finally have the opportunity to rest.

Let’s hope they still fit when winter ends in 50 days.

It began with a small brown trout dangling on the end of my son’s fly rod some two years ago. Since then I’ve taken a fly fishing class, joined a fly fishing club for which I am now webmaster and secretary, bought fly fishing gear and, yes, caught trout and bluegill on a fly rod. Ask my

wife and she’ll tell you I look the part when fully geared up — sort of like a shorter version of Henry Blake in M*A*S*H when it was dressed to go fishing. (No lures on my hat though.)

But during the last week I have begun to flirt with fly fishing as an obsession. I tied my first few flies. I started easy, working on a flex tube scud and some zebra midges. I followed the instructions from a DVD to tie red and green chironomid (midge) pupa, replete with a red/green body, black head and white gills. Then I grew daring. I read the instructions for a Wolly Bugger…something I have yet to fish but is considered a good fly for going deep into some of pools I fish. I was rather pleased with the result, though I wouldn’t call if perfect.

My last two attempts were probably a bit too ambitious for the late hour of the evening. I began with a fur ant, which required dubbing and well as tying on a hackle. I think it turned out okay, but I’ve got to learn better how to lay down the hackle. Next I tied an hare’s ear nymph. (This design, also in other colors, doesn’t duplicate or imitate anything in nature, yet does well catching trout.) It was a bit of a struggle to get all of the parts in the right places and to figure out where my hand should go and where various parts should be held until it all came together. But it did come together. Again probably not the best example, but it offered a good learning experience.

If only I could get out and catch a fish on a fly tied by my own two hands!

(Yes, I’ve been warned that this may be only the beginning…next I’ll want to build my own rod…)

Reasons anyone should be amazed at catching rainbow trout (Oncorhynchus Mykiss):

Leaving family always leaves a bit of a hole in my stomach even if my mom does stuff me with pancakes and Lil’ Smokies. But it was time to head south, and by 9:30 a.m. Sean and I were on the road. It’s been a typical Washington day…gray with drizzle and rain here and there. Traffic has been minimal, so we’ve made good time. Just about noon and we’re about 14 miles from the Washington/Oregon border. In 24 hours we’ll be back in California.

After a night in Rogue River, we woke to sunshine and a clear road home. It was a good trip. Something that should happen more often.

The sunny dispositions that Sean and I brought to the Pacific Northwest once again showed its power, as during 8:00 mass we could watch, through the large windows behind the altar at Holy Innocents Church, as the clouds parted and allowed the sun to shine through. A quick tour of town was included in the drive home after mass, though thankfully there as no quiz! The morning passed by with the reading of the newspaper, the watching of a football game and my meeting a neighbor who also happens to enjoy fishing (and makes a mean beef jerky).

Then Mark spirited us off to a department range for another manner of manly activity. After an abbreviated but still through session on safety and strategy, we were given the opportunity to shoot a 9mm pistol. I would dare say that Sean and did very well consider our limited training and experience. With a break to let some officers qualify, we took the nickel tour of the precinct house, after which we watched a few more officers run through their “quals.” Soon we had our own lane again and practiced some paired groupings (sight, shoot and as soon as you sight again take a second shot) and double taps (sight and shot two shots as quickly as possible). All of our shots hit the target and most were center mass. Not too shabby for amateurs.

After spending more time than expected at the range, we met everyone (parents and Mark’s family) at Ixtapa for a hearty Mexican dinner. That was followed up my much wrestling among an uncle, father and cousin, as well as dessert. It was a nice way to spend our last night in Washington.

[Pictures from this trip can be found by clicking here.]

Call it the seasoning of age or attribute it to the wisdom that comes with the passing years, but I find myself increasing grateful of family making time for our visits. My brother “donated” his time (and my thanks to his wife for allowing it) to make himself and his family available to Sean and I during our time here, so Saturday we headed to his house for a morning visit with his family while we mulled over any man-bonding activities we might undertake.

We opted to head to the now traditional man movie and ended up taking over a single theater. Afterward, back at the house, we kept testosterone levels high by shooting various targets with an airsoft gun. We later met a next door neighbor and, after I got my video game fix (and seeming to amaze the neighbor’s kids that this old guy can play XBox pretty well), it was time for a great family dinner with mom and dad. And dinner was followed by three desserts.

(While it might sound like we didn’t do too much, isn’t that sometimes what a vacation is about: doing less? But even while we did less we had the opportunity to simple hang out, which I think often is underrated.) 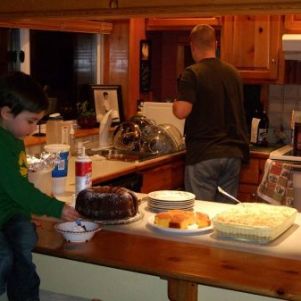 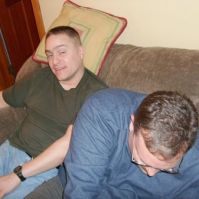 The bros and baby Levi… 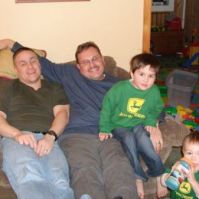 We again took our time crawling out from under the bed sheets this morning, to be greeted by the wafting smell of waffles. Moms – at least my/our mom – never forget how to take care of their kids. Stuffed with waffles we read the paper and awaited the arrival of my brother Mark with his kids. It was heart-warming to have Kaden enthusiastically jump into a hug with me. Little brother Levi was a bit more standoffish, but by the end of our trip would warm up to having Uncle Pat and big Cousin Sean around. We had a quick visit of about an hour, but after being away too long, it’s always great to find that we can quickly fall into the comfortable rhythms of being family. And despite distance, infrequent visits and the years that have past it seems that my brother and I always quickly fall into the goofiness that makes brotherhood so fun. …it was a good morning of reconnecting with my nephews.

Under threatening clouds Sean and I headed out the door in the direction of Seattle. It might be a reflection of the patience that comes with age, or the fact that we left when traffic would be minimal, or both, but it seemed that we pulled into Seattle quickly. Luck or perhaps our sunny dispositions must have influence the weather as we found sun and blue sky in the Emerald City. Without an specific goals in mind we wandered Pike Place market, where we bought some “Jazz” apples (a hybrid of Fuji and Braeburn apples). On the waterfront we fought cold winds as we walked between various shops.

We departed late afternoon to head east to Issaquah, the town (now a city) that established my first real connection to Washington, to accommodate Sean’s desire for a visit to Boehm’s Candies. Alas, he was to be disappointed as Boehm’s now focuses on their chocolates and does not carry the rice candy “fly saucers” that he recalled from his younger days. A drive through town dredged up some of my old memories of the fears and struggles of my younger days. Despite being so long ago the memories seem so fresh.

As if we planed it, we pulled into my parent’s driveway just in time for dinner… 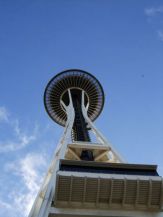 Look toward the Olympic Pennisula 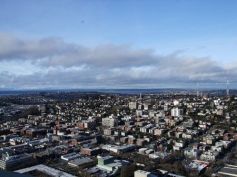 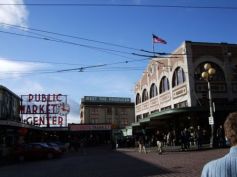 It’s good to have connections. Rolled out of bed this morning, not too early, not too late. Buying into being “on vacation” and taking advantage of the guest room at the home of retired parents really does push one to take some time. Time for a bit of conversation over breakfast. Time to pursue the newspaper.

About mid morning we headed out to a Microsoft campus to meet with our “insider,” who then provided entrance into the company story. We took advantage of this opportunity to pick up a few upgrades and accessories…a couple of XBox 360 controller batteries and a few Microsoft applications.

We stocked up on some cold cuts and condiments before heading home, where we spent the afternoon simply hanging around, with sprinkles of conversation and technical support surrounding an old PDA that I bequeathed to my dad. For my parents it may have been more of a regular day, but for Sean and I was a day without the worries, deadlines or pressures of everyday life. 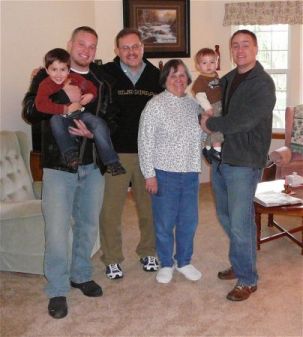