About this time each year I make the 789-mile road trip to visit the folks and the brother and his family with anyone willing to spend what’s probably too much time with me. It’s a longish drive of about half a day plus two hours.

This year, while discussing this year’s plans with my sister, she was quick to chide me for not flying. She pointed out that flights to Seattle from San Francisco aren’t that expensive. I feebly argued that it cost less to drive, even if it meant a lot of time behind the wheel.

Now that there’s been time to think about it, I still favor driving to nearly any distant place.

It’s easy to fly these days; no more difficult than grabbing an Uber. Book a flight, arrive on time, wait in line, and a few hours later you’re where you want to be. There’s no adventure. At least not the kind of adventure I’d enjoy: delayed flights, crying babies and minuscule snacks. Admittedly, flying does minimize the “cost” of time, but packed into a big aluminum tube traveling at 575 mph, one becomes disassociated from the process of travel.

On the other hand, traveling on terra firma requires participation with the outside world*. The possibility of adventure is a constant companion: stopping to take in new snow on the hills at the California/Oregon border, comparing rest stop bathrooms, watching the sun rise over fields just south of Redding and set just north of Vancouver, Wash., all during the same day. 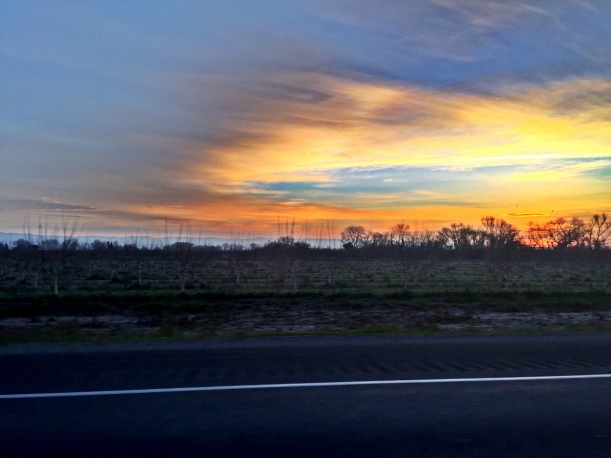 It’s misadventures that create the strongest memories. Seventeen years ago, when it was just the boys and me, on the last day of school, we left in a worn out 1988 Honda Accord for Yosemite. The 12-year-old sedan squatted under the weight of camping supplies crammed into every available space. Of all the cars I’ve owned, it was my least favorite, a car purchases out of necessity with limited funds.

In retrospect, that day marked the beginning of one of the hottest summers that decade. The temperature had climbed to over 105 degrees by the time we passed through Manteca, in the center of the Central Valley. When Highway 120 hits Oakdale, the road begins a slow climb into the foothills of the Sierra Nevada Mountains. Though not steep, during this climb the Accord lost power and the temperate gauge began its own ascent. There’s no clear recollection of how many times we pulled over to let the car cool down. Despite better judgement, we pushed on and enjoyed a fantastic week in Yosemite Valley. And the boys have always remembered this trip. We’d often drive the same route to the family cabin and Sean’s running joke would be to point out oak trees he remembered “watering.”

Travel by car isn’t the most convenient way to travel, and certainly has its limitations. Neither is it the fastest mode of conveyance. But it can be a good option for those interested in passing through, being part of, and experiencing the world.

* This is also a big plus of motorcycling, but that’s for another time.