It soon became clear that I had fooled myself.

Being a high-country angler at heart, solace is found in solitude. While this opening day morning was marked by lonely weather, with steel gray clouds and drizzling misery on all below, it was snowing above 5,000 feet. That prevented everyone who had hoped to cross Sonora Pass to fish the eastern Sierras – myself included – stuck to fishing limited waters on the west slope.

My early arrival allowed seclusion for only so long. And if trout had eyelids, I would have argued all but a few had shut their eyes to my flies. But it was nice. All sound was dampened by wet pine needles. Low-hanging clouds induced a preternatural calmness. Drops of rain filtered through the overhanging branches of dogwoods and cedars to finally gather together in larger drops before falling and pockmarking the stream with miniature geysers.

The crunch of tires on gravel sliced through the trees, tearing me from my musing. A first, second, then third vehicle pulled up. Camouflage-clad fishermen, with rods almost as long as the stream is wide, hauled out tackle boxes that could double as streamside seating, and each tipped their hat to me and lined up a few feet away. Hooks were buried into bright red salmon eggs and lines were cast.

I remained stationary. It’s not uncommon to see bait or hardware fisherman travel in packs, but this had caught me off guard. In this spot, however, I am usually alone with a rare visit by one other fisherman.

The small pools I knew were upstream were, despite the drought, rendered temporary inaccessible. Getting to those pools required clambering over a rocky outcropping, and the rainfall during the night – downpours woke me more than once – raised the stream just high enough to make it too dangerous for one who’s not so young anymore. Downstream was a canyon that wasn’t much safer for the same reason.

Snow dictated I head downslope, where there were few options.

Though opening day may nowadays be more routine than tradition, I was on a mission to shake off the rust of winter, to prove that I could still cast and was still fast enough to set a hook (and correspondingly adjust my hook set, whether it was my dry fly or nymph that fooled the fish). And so it was that I was committed to spending the day attempting to reassure myself that given the opportunity during the coming summer and fall, I wouldn’t look like an idiot swinging a stick on a river, creek, stream or lake.

There are a number of waters along Hwys 108 and 120. It would have been preferable to head away from the opening day crowds, likely as far as Goodwin Dam, where its 4-mile stretch of tailwater forms the Lower Stanislaus River. But that would require a steelhead report card that I didn’t think I’d need this year. I wasn’t driving something that could go off road, eliminating a large percentage of other waters. Other possibilities were still closed off by season gates.

There are never-ending debates about the differences between hatchery and wild trout, but wanting fish to fool meant wading into a put-and-take fishery.

By the time I arrived, sunlight was peeking through parting clouds. This is one of those west slope year-round creeks around which is created an oasis of vegetation despite the surrounding dry hills, on which this year the grass is already gold. It’s frequented by meat fishermen who I always hope paid their license fees just as I did. 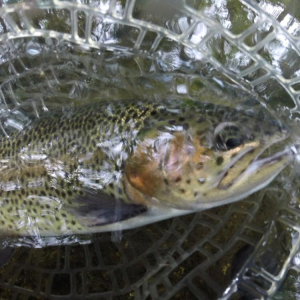 Until the heat of summer, most folks fish the south side of this creek. Waders allow me to access the north side, dropping my flies into seams on the edges of pools and riffles. Fish were there and, hatchery-born or not, seemed to have an appetite for something that looked a bit natural. My catch rate vs. everyone – while not always the case, but often repeated – was about three to one. I have to admit a look of bemusement might cross my face now and again when other anglers scramble to try to duplicate my style or squint at my size 16 and 16 flies, which they likely can’t see from where they are.

More important to me than the numbers was the ratio of fish hooked and those landed. Better than most opening days, I hooked fish on about eighty percent of the takes I saw and of those landed most. A fellow across the way lamented that he didn’t bring his fly rod, but spin casting was the best way to keep his son engaged. That brought back memories in me and a gratefulness that I tried over the years to acquaint my kids with a sport that can bring a lifetime of good times.

This was the first opening day for me in quite a few years. Previous years I spent opening day weekend helping to teach aspiring fly fishers.

My thoughts now have shifted to thinking it would have been better to teach this year’s opening day weekend and instead of waiting for a single day each year, get off my duff and avail myself of the growing number of year-round moving trout waters in the Sierras, both on the west and east slopes.