I think the most rewarding fish I ever caught was vivid wild rainbow from Hot Creek, one cold fall morning a few years ago. It wasn’t the biggest fish and it wasn’t the first. It was the one that confirmed I was doing something right. There have been quite a few fish since then, but this is one that stands out. 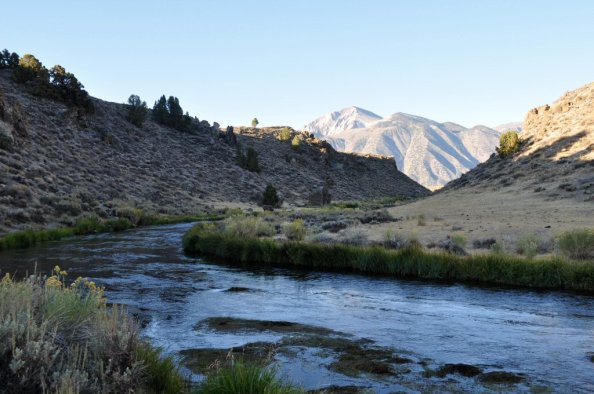 Early morning on Hot Creek, looking west to the Sierras.

I’ve described Hot Creek as a personal crucible that draws me back whenever I’m near. It’s the kind of place you’d return to regardless of the fishing. Early in the morning, before the sun rises above the canyon walls and less hardy fisherman show up, it can be a meditative place. The last four years I’ve been alone during this time, at least without human company. Deer will eye me while slowly munching on weeds from the creek. Birds of all shapes and sizes fly over and flit about the stream as caddis begin to hatch. Dark shadows of trout slip between the weeds.

Hot Creek is a gift plunked down in the middle of some of the most gorgeous country. It flows for about 3 miles through a huge meadow of wildflowers and tall grasses — which has been under the private ownership of Hot Creek Ranch for decades — and is surrounded on one side by the Sierra Nevada Mountains and on the other by the high desert of the Long Valley Caldera, which stretches about 10 miles to the Glass Mountain Ridge. The most fished public stretch flows through Hot Creek Gorge, below the ranch.

This year the creek offered a special challenge: low water and weeds. Hot Creek is known for the weeds that make it such a prolific stream; weeds that necessitate good casts to small lanes if one is to expect a decent drift.

This year those lanes seemed to be half as wide and half as long. Most of the fish where either hovering at the beginning or the end of these lanes, or just at or under the edges of the weeds. Some could be seen. Others were revealed as they fed on something too small be seen. 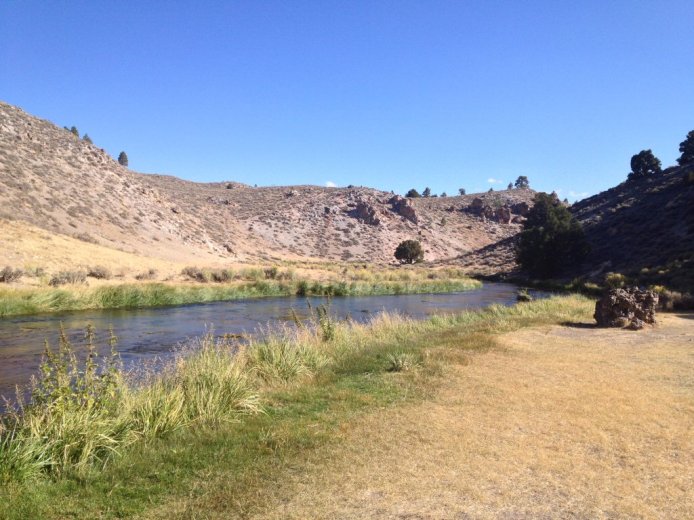 If there’s one consistency at Hot Creek, at least during the fall, it’s the size of the flies that work best. A favorite among our group this year was a small Zebra Midge, but for me it was a size 20 CDC Caddis. I needed help seeing a fly that small, so this day it would trail a decent sized grasshopper pattern.

These days I tend to use dry flies more often as indicator in slower moving waters. I did so during my first visit to Hot Creek. Not because I wanted to, but because everything I had read and been told about this stream deemed it “highly technical.” I still don’t really know what those words mean when used to describe a river, stream or creek, but they were scary at the time.

These days, Hot Creek treats me fairly. Choosing the proper fly, casting well to the right spot and getting a good drift is generally rewards one with a strike. Whether or not that fish makes it to the net is up to me. This year, of about a dozen fish hooked, I’d lose half of them in the weeds. Others would throw the hook after going airborne. Only three would make it to hand for quick release.

I spent all of the morning and much of the afternoon fishing and exploring, visiting a lower section of the creek for the first time, and eating lunch about 30 feet above the creek while watching rising fish and mesmerized by the vivid landscape around me. It took more effort than usual to leave.

Somewhere along the line I read about a guy who fishes the Eastern Sierra, and on his vehicle is a bumper sticker that reads, “Don’t believe everything you think.” Appropriate for Hot Creek. 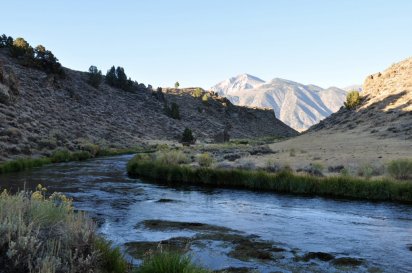 Early morning on Hot Creek, looking west to the Sierras.

Ask anyone who attended my club’s Eastern Sierra trip about the fish that made it to the net, and he’s likely to tell you it was about 18 inches. And that will be the truth.

For some of our group that was the length of one rainbow trout. For others, that total of 18 inches was the cumulative length of six brook trout. That’s just how it can play out in the Eastern Sierras.

The nice thing about an annual trip is that there always seems be to a landmark at which everyday life melts away and the focus shifts and sharpens to living in the present.

Morning above the West Walker River.

In this case, it occurs once the descent from Sonora Pass begins and the high desert stretches out in front of me. The route of choice this year was Hwy 108, as Hwy 120 (Tioga Road) was closed through mid September due to the Rim Fire. The usual commute traffic was there. Twice I would weave between cows meandering on the asphalt.

There are two maxims that apply to my fly fishing: (1) Get the skunk of as quickly as possible and (2) shaving serves no purpose. To address the first adage, I stopped at the West Walker River earlier than most fly fisherman would even take their first sip of coffee. Early enough to enjoy the stirring experience of hearing reveille echoing from the Marine Corps Mountain Warfare Training Center before my first cast.

Most people head for “the bend,” knowing that pods of planted trout can be found and, occasionally, a bigger fish might be found under a cut bank. But upstream, pocket water is a bigger draw for me.

Pocket water slows me down considerably, and it’s a good thing. Besides the obvious, avoiding a fall and at least a sprain if not a broken bone or two, the pocket water in the Sierras tends to be favored by the better-looking wild fish, and they need to be stalked. With a slow and low approach, I found plenty of wild rainbows willing to play.

When the sun was high in the sky and hiding my profile consigned me to shade and leg cramps, it was time to head down Hwy 395 to Tom’s Place Resort, , which if you’ve ever been, is a bit more basic than the name implies. But the price is right. The rest of our group, totaling 12, would filter in throughout the afternoon.

After that, the real fishing would begin, to be followed by free flowing homemade beer, good food and plenty of lies. 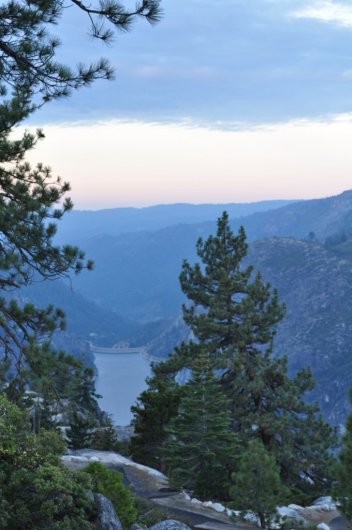 Smoke from wildfires hindering the view out over Donnell Reservoir toward the Sacramento Valley. 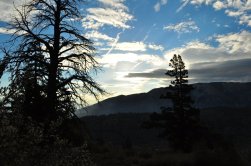 Morning above the West Walker River. 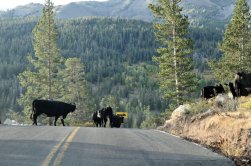 Settle down, it’s not what you think.

Blue-footed boobies have apparently adapted decided to move north, showing up north of San Francisco for the first time in almost 30 years.

From the Los Angeles Times

Blue-footed boobies, which rarely venture north of Imperial County’s Salton Sea, are suddenly “all over the place,” said Kimball Garrett, manager of the ornithology collection at the Natural History Museum of Los Angeles County.

But like Hitchock’s film, this boobies invasion could be an ominous warning:

Some scientists are wondering if the visiting boobies are somehow related to a recent series of distressing biological mysteries in Southern California’s coastal waters.

“There’s a lot of weird things happening out there,” Dan Anderson, a professor of wildlife biology at UC Davis, said. “No one is sure of what the cause is.”

If a species moves of its own accord, is it invasive?

To be honest, I left home yesterday (actually left from the office) not as fired up as usual about the annual club fishing trip to the Eastern Sierra.

Now that I’ve been on “the Eastside” for about 16 hours I know why.

I didn’t get out with the fly rod often enough this year. I had forgotten what it meant to be standing in the clear water of a mountain stream so intensely focused on fooling that one fish that every other concern or worry melted away.

Leading up to this re-realization was a pretty unique — or special — morning.

The traffic ran into during my commute was entire comprised of bovines. Yes, I had to move into the other lane to pass cows.

My first stop was at the West Walker River, and as I contemplated the river, reveille echoed over the meadow, marking the start of the day at the Marine Corps Mountain Warfare Training Center. (To quote a Facebook friend, “Hoo Ahh to that! What a great day to be fishing in the USA!”

P.S. This entire post was composed on my iPhone, so please excuse any sloppiness. And I really don’t know how I feel about being able to do so.

It’s been a bad year for water in California. The April opener was one of the best in years thanks to low water levels.

Next week we’ll see for ourselves what Eastern Sierra rivers and lakes look like four months later.

One guide recently referred to Bridgeport Reservoir as a “pond.” Bridgeport is so low that its outflow into the East Walker River has been tainted by algae — algae that usually floats closer to the surface of the reservoir — and now the river is regularly off color and weedier than usual. Lake Sabrina in the Bishop area is so low that the front (manmade) lake no longer exists. The level of Crowley Lake is better than might be expected, but low enough to concentrate fish in the deepest areas.

The route taken by myself and guys from the club will be dictated by the Rim Fire. Hwy 120 remains closed. An expectation that the fire might not be fully contained until Sept. 20 doesn’t lend any clarity as to when it might open.

That’s not a big issue for me. I usually head over Sonora Pass via Hwy 108, with stops at the West Walker River, Little Walker River or Molybdenite Creek.

Thankfully, there will be water to fish when we settle in at Tom’s Place Resort (which certainly isn’t the resort you might think it is). The Upper Owens is supposed to be in good shape. The Middle Owens is flowing at an unseasonably high level. I may head to the high country, visiting alpine lakes and streams where I hope the fish are already preparing for a long winter.

However it works out, there will be lies told over beer and good grub.

A photographic example of what might be expected after the #RimFire. Nature heals. http://t.co/0e6rBjJHZw #Yosemite #SierraNevada

Hard to accept that killing any trout can be a good thing; but if it means better things for natives, just might be. http://t.co/ZDUVBZoS0t