Having found a burger joint on Yelp, Karen and I decided we could stroll from our hotel to a dinner spot. An earlier-than-expected arrival in San Pedro allowed time to get a few kinks out and unpack, and a walk would be welcome relief after six hours in the little CR-Z. 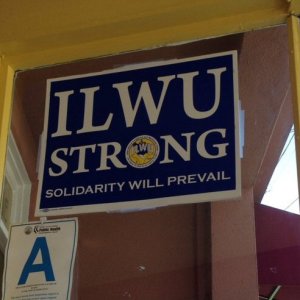 There’s no denying San Pedro’s connection to the sea. It’s on the south side of the Palos Verdes Peninsula, with two sides directly adjacent to Pacific Ocean. Now a working class community (it’s within the city of Los Angeles), it has roots in the fishing industry and from 1919 to 1940 was home to the United States Battle Fleet. The battleship USS Iowa (BB-61) remains in San Pedro as a museum ship.

Walking the streets of any city offers an upfront education of both the neighborhoods and the people who live there. The character of the local area was revealed as we walked the six blocks from our hotel to Bunz Gourmet Hamburgers. (Yes, “gourmet” is thrown around a lot in the culinary world and I’m always skeptical, but we do love our hamburgers.)

A couple of blocks away from the hotel, a strip shopping center partially revealed the character of this neighborhood. At one end, you could get some money at a check cashing store and with that cash you could step a door down to purchase vapes and/or medical marijuana, get a tattoo and, if inclined, buy lingerie (not the Victoria’s Secret kind). Buildings in the next block were occupied by a liquor store and a vacant car wash. Across the street were three national fast food chain restaurants. One more block down was another marijuana dispensary. This was the theme on this stretch of Gaffey Street.

All what you need.

Bunz Gourmet Hamburgers is a about half a block off Gaffey, down Fifth Street, in a nondescript stucco building painted an adobe pink color. Tucked between apartment buildings and homes now used for commercial enterprises and medical offices, Bunz is one of two tenants in what appears to originally have been a dedicated retail building. While signs clearly point out the restaurant, the space occupying the other side of the building was devoid of any indicator as to its purpose. It was dominated by the type of plate glass windows that formerly displayed wares for sale but now obscured by curtains. 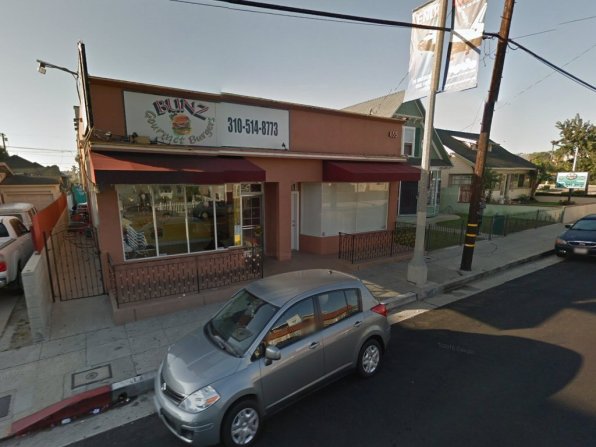 Bunz and the suspicious co-tenant.

Bunz is decidedly a neighborhood joint, small and focused. The menu is easy to figure out, with plenty of options for building a burger. The easy-going atmosphere is aided by a fun music selection and friendly service. Our order placed, we took seats at a table outside, watching the world go by as we waited.

Karen could see the other side of the building. It seemed vacant. Until someone walked up to the door, went in, and walked out a few minutes later.

Then a young woman hopped out of her car with a dour look on her face. She took her young daughter into Bunz, where one of the wait staff gave the girl a drink while mom went next door. The woman emerged with a smile on her face. This pattern would repeat, every two to five minutes, the entire time we ate lunch. Thankfully there was a light breeze that allowed us to eat relatively odor free.

Then we got a whiff – urban skunk.

Thankfully, the wind had shifted by the time our burgers arrived. “The Paradise” for me, loaded with pineapple, bacon and teriyaki sauce, and it was pretty fantastic. For Karen it was a basic burger, the “control” by which she judges all burger makers. The burgers were good and the fries close to excellent.

The walk back to the hotel was interrupted by a stop at a local doughnut place, ‘cause doughnuts can be dessert. Racks displayed all varieties of doughnuts and related sweet pastries, but some lonely cronuts caught our eye. There was nothing but empty air behind the counter, and Karen called out quite a few times before an older woman appeared. We inquired about the cronuts only to be assaulted by the woman’s brutal honesty that they probably weren’t the best choice this late in the day. Intent on not leaving without sugared dough, we settled on half a dozen mini doughnuts that disappeared before we returned to the hotel.

Being that we were on vacation, we spend some time that evening at Jackson’s Place, a fun little lounge that offers beer, wine and table top games. Though only three blocks east of the old neighborhood surrounding Bunz, Jackson’s Place is closer to the port and on the edge of San Pedro’s historic downtown, which seems to be undergoing a revitalization effort. Buildings in the area show a mix of updated architecture designed to echo the history of the area and buildings clearly in need of repair, while established trees and new street lamps line the streets.

Being on vacation when others aren’t, particularly in a town that’s not a vacation destination, can be odd. Only a handful of people were scattered about Jackson’s, lending a low-key feeling to the place. That’s not to complain; we got more than a fair share of the bartender’s attention. After a few games of Uno, it was back to the room to sleep.

The next day our ship would sail.

a fall vacation, part one – finding where there are no Starbucks

The last Monday in September, Karen and I loaded up the two-seater and started our vacation by heading south. This trip would include stops in San Pedro and Avalon, Calif.; Ensenada, Mexico, and ultimately end back in Los Angeles.

To get to our first destination, we made our way out of the Bay Area to that soulless ribbon of road, Interstate 5. It’d be nice to say we left early, but oh-dark-thirty is the usual time we depart for work. Luckily, that means missing most commute traffic. Thankfully, Karen and I enjoy each other’s company and once and a while we can still hold a substantive conversation, a big plus when droning down I-5.

The last few years we’ve developed a rhythm when it comes to traveling. We outline plans, flesh out an itinerary, make reservations, and pack. (Inside and quietly, my 10-year-old boy still finds it hard to believe I am old enough to make and manage all of these arrangements.) While I still like to outline the stops along the route and the timing, I’ve come a long way in simply letting the journey play out as it will.

We generally make good time on any highway, even stopping when we want or need to, usually for fuel, for both us and the car. This stretch of the trip would total 402 miles and end at the Best Western Plus San Pedro. Running through California’s San Joaquin Valley (aka Central Valley), I-5 bisects some of the state’s richest agricultural areas and is the origin for about 10 percent of all U.S. agricultural production. Visible from the highway are fields of grapes and orchards of citrus and stone fruits, almonds and pistachios. On any given day, you can also find a bump crop of freight trucks on I-5.

This highway is the main corridor between northern and southern California. Over the years, I’ve driven it all hours of the day. The traffic is constant and never seems to thin out. Between the two of us, to put it politely, Karen is the speedier driver and three times we passed the same truck after quick stops. There’s not much to see in the 160 miles from Gustine to Grapevine, and we discovered that there is no Starbucks in the 60 miles from Kettleman City to Buttonwillow.

The view from our destination. The next day we’d be headed toward those cranes.

The weather was beautiful. The uncultivated terrain was dry. The grass was not “California gold” dry; it was an ugly, dead color. When not conversing, we had podcasts to listen to during the more desolate expanses.

A few landmarks can’t be missed. Harris Ranch is heralded by the stink of a nearly 800-acre feedlot and the cattle that inhabit it. Weathered, faded and grammatically incorrect homemade signs calling the Central Valley a “CONGRESS CREATED DUST BOWL” pop up once and a while. As if taunting, The California Aqueduct periodically snakes into and out of view. One can’t miss the iconic windmill towering over Pea Soup Andersons. (Once the sole eatery here, it now competes with no less than six chain restaurants.) The 77-foot tall windmill also marks the off-ramp for the San Joaquin Valley National Cemetery, home to California Korean War Veterans Memorial and the bronze 11th Airborne Memorial.

Soon we were climbing The Grapevine. (For those unfamiliar with California, The Grapevine is the section of highway – named either for a local creek or the vineyards that once dotted the area – that crosses the mountains of the Transverse Range and over the Tehachapi Mountains to peak at 4,144 feet.) With a 6 percent grade, The Grapevine rises about 1,500 feet over 5 miles. A collection of roller coasters at Six Flags Magic Mountain marks the far edge of urban sprawl.

After the long descent into the Los Angeles Basin one’s ability to navigate is tested by a collection of convoluted interchanges. Near the outskirts of San Fernando, it became difficult to resist the urge to refer to highways in the local vernacular: “the” 405, “the” 100. The lack of traffic was welcome, however, and we arrived at the Best Western Plus San Pedro earlier than expected.

There’s often a pregnant pause and disapproving look when you tell people familiar with the area that you’re staying in San Pedro. It didn’t seem that bad.

Just down the street from the hotel, where one could cash their paycheck, pick up some vapes and medical marijuana, get a tattoo and pick up some lingerie.