The good news is that the clarity of Lake Tahoe improved last year. The bad news is the whys. Precipitation in 2012 was only 71% of average and there was a lack of “deep mixing” during the winter.

While the lack of precipitation means pollutants flowing into the lake, the lake will lose shoreline with any prolonged drought. 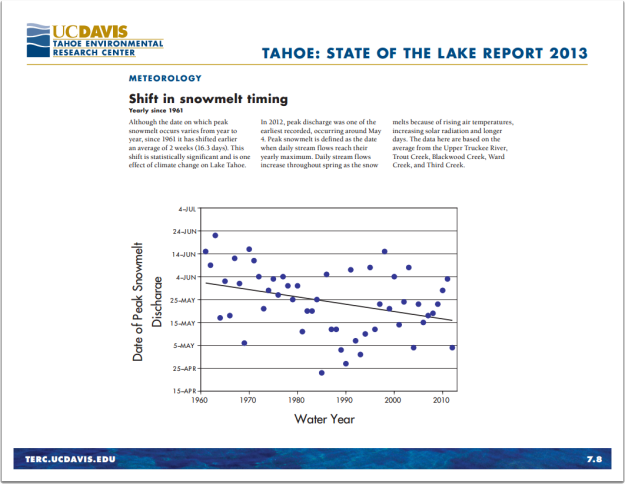 And, maybe you’d fish those rivers, streams and creeks a bit earlier in the year. Snow in the Tahoe Basin is melting nearly a month earlier than it did in 1960.

The lack of deep mixing – cool surface water sinking and forcing nutrients deeper in the lake to the surface, also know by fishermen as “turnover” – suppresses algae growth, which would otherwise cloud the water — but that also means warmer water temperatures. The annual average surface temperature of Lake Tahoe last year was nearly 53 degrees – the highest ever recorded.

Perhaps the scary part is a few lines in the intro to the report written by Geoffrey Schladow, Director of the UC Davis Tahoe Environmental Research Center:

“While Lake Tahoe is unique, the forces and processes that shape it are the same as those acting in all natural ecosystems. As such, Lake Tahoe is an analog for other systems both in the western U.S. and worldwide.”

You can read the relatively short report update here.