So this week my news feed coughed up an item about a Kickstarter campaign to fund the development of newfangled Tacky Fly Boxes.

Reading the Tacky Fly Boxes vision statement it seemed to me that it’s not fly retention that’s my problem; it’s retention of the entire box. The entire box should be coated in tacky stuff.

About seven years ago I stumbled upon a stretch of river that wasn’t more than 30 minutes away from the cabin by road, but in the early trout season offered an opportunity to fish in solitude. It’s an area deep within a canyon where dogwood and pines filter the sunlight. Only occasionally is the shade is broken by shafts of light, lending an emerald-green cast to the air. The river is lined by boulders much of its length here, and stepping from rock to rock is necessary.

The excitement that comes with discovering new water was amplified by the willing rainbows. It was the kind of catching that’s so good you purposely slow down to savor each cast, hookset and fish itself. But this was my early days of fly fishing. I hadn’t yet acquired any habits or routines. 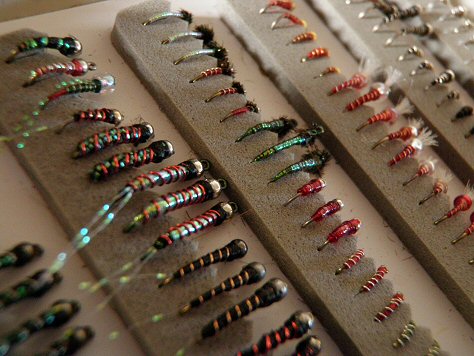 The plan that day was to fish one river in the morning and another in the afternoon. When I arrived at the second river I reached into my vest pocket, unzipped and now empty. No fly box. It’d be a lie to say there was no panic. To those who say fly fishing really isn’t that expensive, try losing an almost full fly box. Buying a few flies at a time doesn’t seem like much; add them up and it can be tidy sum.

After only a short internal debate I headed back to the first river. It should have been a futile search. More than likely, the fly box was about five miles downstream by now.

Retracing my steps, on the last boulder, nestled in moss, was my fly box.

I’ve adopted on-the-water rituals since then. I have lost a net to some trees while hiking through thick bush. One rod’s been broken. That fly box, however, was the one lost item that made me question taking up this hobby.

I didn’t give up. It’s all been downhill ever since.

One thought on “a tacky fly box, almost what I need”