There was a lot of fishing and more hiking crammed into last weekend that originally envisioned. Much of the time, there was more of a focus on adventure and exploration than catching. Perhaps it’s maturity.

Lessons have been learned the last few years and avoidance of the Bay Area commute dictates my departure time. Shoving off during the late morning and making a few stops along the way lead to a late afternoon arrival in Twain Harte. Being the Thursday before Memorial Day weekend, the town still had that hushed, pre-summer feel.

With gear stowed and a few hours of sunlight left, it was time to preemptively get the skunk off. Fifteen minutes up the highway and ten minutes down a Forest Service road is a stretch of a fork of a relatively well-known Sierra Nevada river that offers prototypical put-and-take habitat with all the conveniences. It’s easily accessed, offers a picnic area and toilets, and the makeup of the river in this area naturally corrals the hatchery brood into three pools.

The artificial twilight created by towering pines made it difficult to see into the water, but the occasional slurp confirmed they were there. This fork is just above 5,000 feet elevation, and generally doesn’t contain much water. Even less this year, compared to the same time last year.

It seems to me that even factory fish retain a natural skittishness, which this day warranted a dry/dropper setup with a light touch. Half a dozen rainbow trout made it to the net in the following forty minutes. During that time, a couple of other folks had arrived to try their luck. The skunk off, it was time to head upstream.

This is a place I usually think of as a quick venue to resurrect skills left unpracticed during the winter and to work the rust out. The spirit of this weekend, however, was to challenge myself.

Hatchery fish clearly abide by that movie utterance that “…life will not be contained” and I was counting on this. About 100 feet upstream, this river is marked by pocket water winding through thick brush. The burble of plunge pools hinted at possible places where any wild offspring might be found. Dappling more than casting, I found a surprising number of the more attractive progeny. None were longer than six inches, making me wish for much smaller rod. 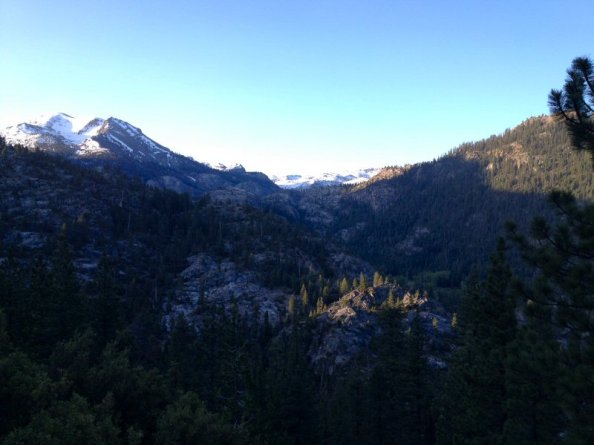 Sonora Pass (@Emigrant Pass): Where I’d be headed the next day.

There’s a feeling altogether different about fooling wild trout. Granted, they are hungry and more opportunistic, and high-Sierra trout will take most any well-presented fly; but they require a stealthy approach. Over-lining these fish guarantees they’ll scatter. Every suspect pool — successfully approached — yielded a fish. After about an hour, I returned downstream. There still being light and good water available, there was time to make a few more casts.

It’s fair to say, fly fishing, fully embraced, tends to permeate one’s life. Two years after attending a fly fishing class I had become the fly fishing club’s secretary, webmaster and was leading an annual outing. Later I was enlisted to help with that same class. One could have a long debate as to whether the hobby attracts those predisposed or the hobby itself engenders the idea, but paying it forward, it seems to me, is part and parcel with fly fishing.

So it was, after a few minutes of hearing the crack of a fly line that I wandered downstream to find a woman waving a rod around in a most inelegant manner. Greetings were tentatively exchange with the question if she’d like a bit of advice. The next hour I offered a condensed version of fly fishing basics, kept within my limited sphere of knowledge. She had whipped the fly off her leader, so I gifted her a couple of flies and used the opportunity to demonstrate a dry/dropper rig.

By then, the sunlight was fading, and having reassured myself that I could still manage to bring up a few fish after a winter away from fishing, it was time to head back to the cabin for dinner and an early bedtime. The morning would come early as my plan was to head over Sonora Pass and hike up the Little Walker River — despite warnings it was high and muddy earlier in the week.

But as I said, this trip was more about adventure than catching.

One thought on “shaking the skunk off and paying it forward”