Having been indoctrinated into fly fishing at an advanced age, there’s not enough time left for me to become that ‘old timer’ who can dispense advice between cigars and streamside naps. This is fine with me; I don’t like cigars and naps only make me grumpy.

What I don’t like is this getting older business. That I even know about and have a personal acquaintance with patellar enthesopathy is unsettling. It’s bad enough that there is no quick remedy for this ‘syndrome.’ It comes and goes, sometimes interfering with my regimen of walking eight to ten thousand steps every day. The idea that it could prevent wading into my favorite streams is unacceptable, though I may not have a say in the matter.

It’s annoying more than anything, but there’s hope that I’ll soon stand in those streams in which the cool, therapeutic water was snow just days before. The fish may not miss me, but it’ll be good for my body and soul to remind them I’m still around.

Fly fishing amplifies one’s observations of the aging process. Any difficulty tying knots can be dismissed to poor lighting. But when it begins to seem that the eyes on hooks are smaller than they were last year, it’s time for bifocals. Then the noises start. While silence is golden when wading to avoid signaling your presence to the fish, each step now elicits some sort of involuntary creak. Slowly, grunts become a necessary component in bending over to tie boot laces. The short hikes to secret spots seem longer. Banks become steeper. 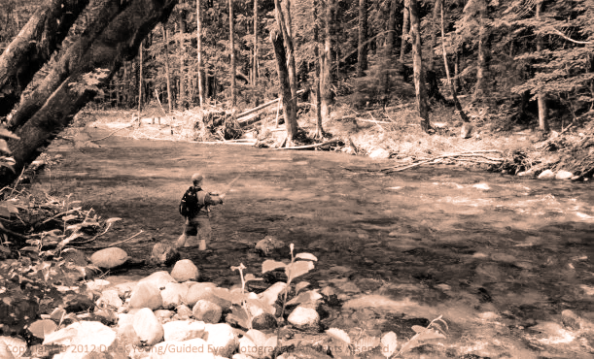 Even with age, all is not lost when it comes to fly fishing. Wading in cool trout waters is excellent therapy for sore knees. Aches and pains fade away with one’s focus on the flies, even if that means watching an indicator (aka bobber). If it ever comes down to needing a more sedentary mode of fly fishing, I’m lucky enough to enjoy stillwater nymphing and have suitable waters not too far away.

I know a few guys who have quite a few years on me and still thoroughly enjoy fly fishing. I’ve been on three- and four-day trips with some of them. They fish every day: perhaps an hour in the morning and another hour or two in the evening. In between they tell stories, slap together a sandwich, drink beer, chew on a cigar and maybe take a nap.

These guys make becoming an older fly fisher seem not so bad.