It seems that I don’t drive distracted.

About a month ago, Willy and I loaded up at his house and left just before 7:00 a.m. and headed east, skipping from one highway to another, toward Toms Place, Calif., the annual fall destination for the club’s Eastern Sierra outing. It’d be my fourth. Along the way we’d be travelling through the Sierra foothills and Yosemite*, stopping at the Crowley Lake Marina for a quagga mussel inspection of Willy’s Bay Ranger.

Over the last eight-plus years I’ve had multiple opportunities to drive Hwy 120, up along scrubland bordering Priest Grade to where the highway becomes Big Oak Flat Road and winds through the sparse foothill woodland surrounding Groveland and much of the roadway, then finally rising into heavier stands of conifers — more correctly a lower montane forest — before the Yosemite entrance station at about 5,000 feet. My past trips encompassed ambitious one-day, 225-mile fishing trips with stops to cast a line at four or five different creeks or rivers as well as motorcycling over Sonora and Tioga passes shortly after opening, when snowdrifts 10-plus feet high line the high-country portions of the road.

It’s a fantastic road trip, to be sure, but on this drive I found that the view was very different from the passenger’s seat of Willy’s Cadillac Escalade.

The motley crew that would comprise the 2011 DVFF Eastern Sierra Trip.

The road welcomed us with limited traffic, and only a few miles of road construction slowed our progress. Anyone who’s driven through Tracy, Manteca and Oakdale — perhaps headed to Two Mile Bar or Goodwin Dam on the Stanislaus River — know that there’s plenty of nothing to look at. It’s here that the road seems to drone on between orchards and field crops, time seems to slow and I’m thankful that the highway is now three lanes through Tracy, once a bottleneck no matter the time of day.

It’s outside of the appropriately named Oakdale that the oak woodland takes hold. The oak trees and an occasional gray pine break up the monotony of the now golden grasses. Then there’s the always subtle shock of the “girls, girls, girls” sign that appears out of nowhere, perched above a rundown hotel and shadowy outbuilding truly in the middle of nowhere, all of which is enclosed by a substantial not-so-ornamental iron fence. That sign is also a landmark signaling the last mile or so before the right turn toward Yosemite.

The history of the Sierra foothills comes to life driving through Big Oak Flat and Groveland in the form of vacant stone buildings adorned with iron shutters and doors that recognize the danger of fire during the hot summers. Jeffery, Yellow and Ponderosa fight for space between buildings. The road here barely allows the passing of two motorhomes, forcing life to slow to a crawl. Not necessarily a bad thing.

As we approached the national park border the density of the forest was more imposing than my long held impression resulting from occasional glances from the driver’s seat. I’d seen these trees before, but details now stood out. A thick green canopy blocks any view of the sky and despite a distinct lack of branches from the ground to a few feet above the average man’s head, there were so many trees that the concentration of trunks cut the range of visibility to a couple hundred yards. As the miles slide by, the undergrowth grows lush.

More than just a stop to hit the restrooms, the Big Oak Flat entrance to Yosemite marks the start of a big change in vegetation and terrain. After another half hour and a left turn toward Tuolumne Meadows, Western Juniper, Red Fir and Lodgepole Pine dominate the view, indicators of the upper montane forest. Meadows of unreal green — in essence nature’s sponges for snowmelt — occasionally come in to view, edged by skunk cabbage and corn lily. In another hour, slabs of granite and collections of boulders begin to replace meadows.

Then, unexpectedly, the view opens up to vast expanses of what I’ve always known as granite and that, in all of my limited travels, seems to be the unique calling card of the Yosemite high country. A less brilliant white, I’d later learn that it’s actually a mix of granitoids and in many cases leans toward granodiorite, which is darker, almost moody and reflective of the changeable weather. It also marks the march into the subalpine forest as one nears 9,000 feet in elevation.

This day was clear and the only distraction was a fuel gauge needle too close to “E” for comfort. Since I tend to measure distance by time instead of mileage, I guessed that the gas station in Tuolumne Meadows would arrive at least a few comfortable miles before the needle was pegged. I grimaced a bit with each incline and hoped I was right. 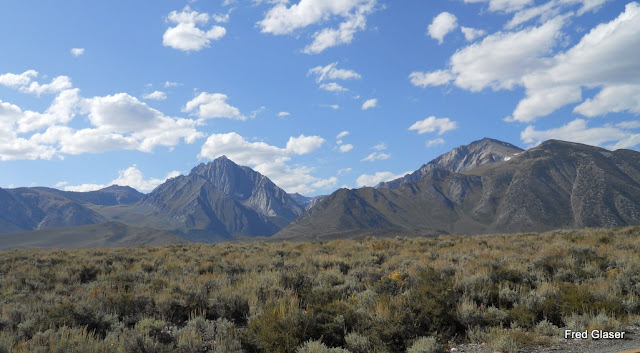 The East side of the Sierra Nevada mountains. (Photo courtesy Fed Glaser.)

My concerns were alleviated by the sight of the sapphire-blue waters of Tenaya Lake, probably one of the most photographed bodies of water within the borders of Yosemite National Park. The beauty of Tenaya belies the fact that it’s a barren, fishless lake. Thankfully, I knew it was less than 10 miles to the Tuolumne Meadows gas station, one of the few Chevron stations with a mini-store that offers rock climbing equipment for sale and rent. We’d done alright so far. It was 11:00 a.m., putting us on schedule to stop for lunch in Lee Vining.

This time the appearance of Tuolumne Meadows and its namesake river was a far cry from a visit in June with my brother and one son. The river was no longer near flood stage; the water had receded and the meadow was again grass. Lembert Dome loomed above us, sheer peaks watched from the southeast and the now fishable Dana Fork of the Tuolumne River teased us from alongside the road. Soon we reached Tioga Pass station and began a descent that would take us past Tioga and Ellery lakes, and into Lee Vining Canyon.

This 9-mile stretch of road harbors the majority of my childhood memories of family vacations. Scattered about are small meadows dotted with small stands of Lodgepole and other pines, and laced by small streams with small, willing wild brook and brown trout. Tioga Lake recalls a day of crazy fishing, when my sister, brother, dad and I stood on rocks a few feet above the lake casting spinners and watching the (stocked) rainbow trout chase our lures, only to strike at the last minute.

It all changes after Ellery Lake. Sheer rock is the predominate feature. Only small plants and hardy trees cling to crevices. Only on the canyon floor, the eventual destination of Lee Vining Creek after its exit from Ellery Lake, offers any great expanse of green. The Eastern Sierra high desert — a Pinyon pine-Juniper woodland — begins near the canyon floor, offering a stark contrast, beautiful in its own way, to the forest passed through to get there.

We had about 12 more miles to Lee Vining and sat down for lunch on the patio at Bodie Mike’s Barbeque just after noon. With the seasoning that comes with eating out-of-doors, we dug in, enjoying the view toward Mono Lake between bites. It was a quick drive to Crowley Lake Marina to surprise the marina attendant with a bone-dry boat. It took longer to affix the tag than conduct the inspection.

A few minutes later we tucked our stuff into the cabin to find ourselves with more time than expected on our hands. The afternoon sun was still well above the mountains to the west. We were there to fish, so took a short stroll to the nearby Rock Creek to cast a few flies.

Rock Creek isn’t too big, but usually heavily stocked and fished just as much. Willy and I split up. I would find a few rising fish willing to strike my offerings, but the kicker was Willy’s first fish — his first post retirement trout. A not-too-shabby brown trout of about 14 inches.

We spent a bit more time casting to rising fish, next to the opposite shore, of course. A few took our offerings, fewer were landed, but it was good to spend a few hours getting the “skunk” off before dinner.

Looking back, it was a good start to what would be a trip that was great for reasons I didn’t expect.

*Not through Yosemite Valley, however. The road to the valley dead ends near the Happy Isles Visitor Center. Hwy 120 passes the valley and heads through the high country and Tuolumne Meadows, then over Tioga Pass.

3 thoughts on “the view’s better from the passenger seat”