It’s hard to pinpoint when I first decided that I wanted a motorcycle in my life.

There were the summer days zipping about family friends’ property in Nevada City on a now forgotten mini bike, weaving between blackberries and jumping off berms that then seemed to touch the sky.

Then there was the mid ’80s Kawasaki 454 LTD that went up for sale across the street when the kids were young. Impractical and unreasonable at the time but gleaming with well-cared-for chrome.

Over the years, when the brother would visit, we’d spend too much time ogling bikes at the local dealership. I loved the ’91-’03 CB750 Nighthawk and absolutely coveted the ’89-’90 CB500 TT, which now is worth twice as much as it sold for 26-plus years ago.

Finally, it was the lessons of life that urged following through – some might call it giving in – to the wish to experience the world on two wheels motivated by controlled detonation. My license was first stamped with an M1 endorsement in 2007.

Only by chance did I start riding sooner rather than later. It was late December that year when opportunity arose in the form of a 1983 Honda CB650SC. Parked in a neighborhood driveway, the price and condition were right. With my wife’s support of my aspiration, I bought it. I learned a lot about riding on it.

About a year later, my son bought the CB650SC from me and, again, opportunity led me to the bike I dreamed about a decade before, a 1997 Nighthawk. Bought on a whim by the original owner, it sat in his warehouse with less than 4,000 miles. I put another 10,000 miles on it. About half of those miles were commuting. The other half accumulated during local scenic rides that led to the annual trips over Tioga and Sonora passes soon after they opened in the late spring. There was just something about starting in warmish weather at 3,000 feet and climbing into the snow-chilled air of 9,000-plus feet.

The Nighthawk left me a couple of years ago. Being an adult requires accepting change. It was for the better and there were no regrets.

I did miss it. Mostly on those bluebird days, when each run into town or to a movie would, on two wheels and exposed to the world, become an experience. Occasionally, long-festering imaginings of longer trips bubbled to the surface.

It began with “just a stop to look” at a local shop and innocent conversations with salespeople. The main attraction was the new crop of smaller displacement motorcycles, with an eye to finding a bike that might fit most of my wants: fun, light(er), reliable, capable of handling a graded forest service road, and suitable for longer highway trips. The Nighthawk weighed nearly 500 pounds. Less weight equated to more fun. The Kawasaki Versys-X 300 is nice. The Honda NC700X is an interesting idea but was a heavy as the Nighthawk. While thought was given to the 200 cc Suzuki Van Van and Yamaha TW200, both seemed a tad small for everyday riding and much less highway capable.

Then there was the Honda CB500X. It fit right in the middle. It passed the ergonomics test. A mental note was made to arrange for a test ride in the coming weeks. 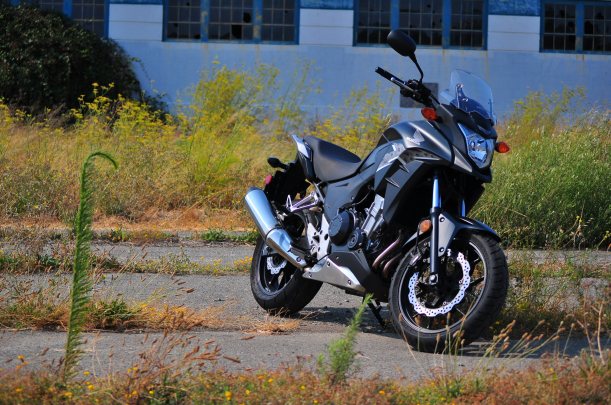 There weren’t many used CB500Xs on the market. But that one Saturday night I decided to see what might be on Craigslist. There were four. The asking price on three was a bit higher. The fourth was priced right. The ad was simple: “2013 Honda CB500X in good condition.” No photos. It had been posted only an hour before. After a quick email exchange and urging from the wife, a meeting was set for the next day.

The original owner had taken care of it. It did have some scars: a nearly imperceptible ding on the right-side cowl and a snapped right rear turn signal. A test ride confirmed its handling, adequate power, and comfort.

With the knowledge that his wife wanted it gone – he now had two motorcycles – and the necessary fixes, the offer I didn’t expect to be accepted was. In the week since I’ve fixed the turn signal and installed a Vololights license plate frame. (Have to say, my clean installation almost looks OEM. That’s a story for later.)

While I tend to be a proponent of spending money on experiences rather than things, this is one thing that I hope opens up possibilities of many new experiences.

I spent a bit of time this last weekend getting the feel of the new bike by exploring the old Mare Island Naval Shipyard.

In front of the USS LCS-102 (Landing Craft Support ship), which saw action off Okinawa.

In front of the Mare Island Museum. 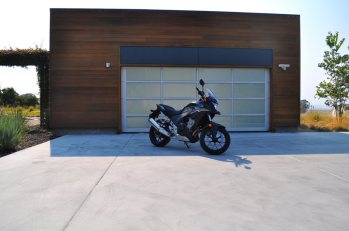 In front of a Blu Homes garage.