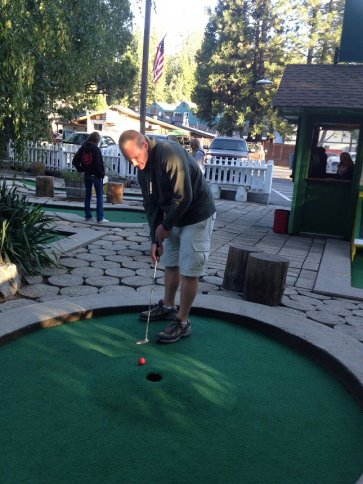 Sean lining up a putt on hole four at Twain Harte Miniature Golf.

When it comes to the oldest son, the easiest way to level the playing field is to chase wild trout. While there may be some claim that genetics would ensure that he’d be at least half as good a fly fisherman as his old man, the truth is that there’s no substitute for experience.

The day after our Annual One-Day Tioga/Sonora Pass Tour, we had an agreement to take it easy, meaning no alarms. We were still up and out at a decent hour, though long after the sun had begun to warm things up. This Friday being designated a “Man Day,” our first stop was for convenience store coffee and breakfast. The day would later include miles of dirt roads, a lot of hiking, and a whole heap of fly fishing. Manly stuff indeed.

We were headed northeast to Arnold, cutting across the dry, now golden Sierra Nevada foothills once scoured by ‘49ers. We passed the time during the hour-plus drive with conversation, the usual good-natured ribbing, and a good playlist. The focus of the day was a small freestone stream rumored to be well worth the effort. It could be easily accessed through a state park.

After inquiring about this stream a few months back, a club member cryptically described in a hushed voice a series of left and right turns leading to a serviceable Forest Service road that eventually crossed Stream X. His tale of the wild trout that lived there was peppered with warnings of fast-moving logging trucks and rattlesnakes.

With the help of a National Forest Service map of the area, I had determined the most likely route. But there’s nothing like local knowledge. We stopped at Ebbetts Pass Sporting Goods for guidance and picked up a few flies from one of the best selections I’ve run across. Bill, owner and long-time resident who’s hunted and fished the area for some 30 years, is always willing to take the time to offer advice. (Based on our conversations, I now have a list of rarely fished and not-so-easily accessed waters.) Bill’s confirmation of our route also included some obfuscation…the first left was after a city limits sign and our destination was near the bridge.

The paved road extended farther than expected. The vegetation here was a bit greener and denser than that around the Family Cabin and a welcome change. Soon enough we were on the dirt road. Not your typical Forest Service road, rather one made more drivable thanks to constant compaction by heavy truck traffic and frequent watering.

It became clear during our pre-fishing ritual — changing into waders and checking rods — that we were in the right place at the right time. Chance would have it that I looked up just in time, over the top the car and through the trees to a bend in the creek about 50 yards away, to catch a glint that could only have been from a jumping fish. An added bonus: it was just us.

Sean was on the stream first and hooked a trout in a small pool. It was about nine inches, and coloration and big parr marks confirmed it as wild. Looking over this stream, it was clear this would be a day of pocket water. At the end of the day, about 75% of the water we’d fish was pocket water and more than 90% of our takes would be on dries.

In typical fashion, we leapfrogged past each other as we headed upstream. Sean lagged behind at one of the better shaded pools in this section. Upstream was a wide, sweeping bend. Trees provided shade on the inside. The outside of the bend must be scoured during heavy runoff, leaving a big field of rounded stones of all sizes. Tire ruts leading down to the stones were left by the logging company’s watering truck and — as evidenced by a pod of obviously stocked trout darkening the center of the bend — a DFW stocking truck. Temptation got the best of me and I got a few planters to take a big stonefly pattern. Sean had since emerged and I moved upstream, only to be halted by a fence extending through the stream and up both banks.

Returning to the bend, Sean and I agreed that, with the two other fishermen who had since arrived, it was suddenly too crowded. 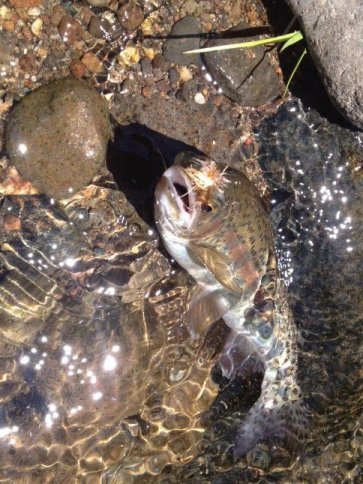 A rainbow trout that’s a bit bigger than expected in this small creek.

Nice surprise in a small creek.

During my time upstream, the driver of the watering truck had chatted up Sean. While sucking water from a beautiful stream that’s habit for wild trout is uncool, at least the driver offered up details about how to get to a more remote and less-fished section upstream. Following his recommendation, we picked our way down a less-frequented road. This isn’t your graded road, but rather a barren section of forest sprinkled with stones and crisscrossed by fallen branches. The type of road that wouldn’t necessarily require four-wheel drive, but where I would have been thankful to have a bit more ground clearance than offered by my (trusty) Accord.

It was slow going. The road meandered away from the stream and gained elevation before a fork dropped us down to a wood bridge.

Here the character of the stream changes. It’s nearly all pocket water. And skinny.

As expected, the fish were spooky. We didn’t really see the fish; we caught flashes of fast-moving shadows in the periphery of our vision. This is the kind of stream that tests one’s ability to pick out suspect water and adequately present a fly. There might be strikes on your first two drifts. After that, it was time to move on. Thankfully, there was a lot of stream available.

My first cast was to ideal pocket water behind a large boulder. Water tumbled past the boulder into a pool that while not deep, was dark enough to hide fish. That first drift netted a brilliant eight-inch rainbow. This was repeated often as we hiked upstream, with nearly every fish chasing our dry flies.

It’s likely we could’ve spent all day moving upstream. But we did have to pick up a wine club shipment in Murphys, so we headed back to try fishing downstream of the bridge. There were a few spots but it wasn’t too far before the stream enters a canyon narrow enough to encourage a solid risk/reward assessment before continuing. 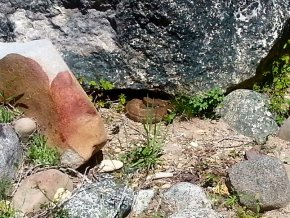 Sean, who wasn’t aware of my decision, was hiking along a deer trail above the stream while I headed back upstream. There was no scream or shout, and it wasn’t until he caught up with me that I learned of the first rattlesnake sighting of the season. Sean was coolheaded enough to linger long enough to take a photo.

We debated stopping to fish again on the way out but decided otherwise. Our drive back to the highway included sightings of a coyote and turkey. After a stop at Ebbetts to report on our success (suitably suppressing how excellent it really was), it was time for a post-fishing beer. Luckily, Snowshoe Brewing wasn’t more than 15 minutes away.

We completed the day picking up that wine, tasting some of that winery’s products, and grabbing decent-but-not-great burgers at a place adjoining a gas station. Music and banter continued on the drive back, with a promise to keep up the illusion that this really-not-so-secret place was our little secret.

I did outfish the boy. I also whooped him in a game of mini golf. Even so, I think he had a pretty great time.

If we were counting — and my son and I certainly don’t — we were both winners this delayed Opening Day weekend.

Mostly, it was great just to get outdoors and chase trout once again. And get out we did, and away from any crowds.

Eleven miles out, to be exact. R. Creek is a tiny thing, a small stream I am sure is barely given any notice by the few folks crossing the small stone bridge. We’d certainly have never taken note of it, much less visited, were it not for two older fishermen who took a liking to our catch-and-release ethic and, in a quiet whisper, described this crick full of small wild and willing rainbows.

We made to R. Creek sometime after eight o’clock. It was one of those so-called ‘bluebird days’ of a California spring, when everything is still green. Just as expected and hoped, we were the only ones on the creek.

The water was running a bit high, but it still looked about as inviting as a small creek can be. A few casts in the usual spots suggested that like the fish, we’d have to adjust to the higher flow if there was to be any catching.

We headed upstream, testing each pocket, pool and riffle. Sean was nymphing. It was a dry/dropper combination for me; a size 20 Parachute Adams trailing a similarly sized Flashback Pheasant Tail.

A bit of strategic thinking is required when it comes to accessing this creek through thick stands of pine, oaks and streamside blackberry bushes. Felt-soled wading boots don’t help and my elbow can attest to the lack of traction afforded on a mat of pine needles and oak leaves.

Then I found it. That picture perfect bend, with a half sunken log offering shade and shelter to a small pod of trout. It was a deeper pool than usual on this creek, about three feet deep. My first cast revealed that depth wasn’t an issue when a six-inch rainbow rocketed from the depths to grab the Parachute Adams.

Now, I’m still very much in touch with my inner caveman when it comes to fishing — I like to catch — and will use what works. But when a dry fly works, there truly is nothing like an aggressive take on the surface, regardless of the size of fish.

I had landed a beautiful ten incher and missed a few more strikes by the time Sean found me. We let the pool rest and ventured upstream. We would return later and we both hooked a couple of fish.

As happens with days during which the fishing and catching are good, time lost meaning and any argument to leave quickly fell away amid furtive glances to promising water. We decided to venture downstream into unexplored territory. Dismissed two years ago as a fool’s errand, it was clear we were mistaken. The shallow braided water soon regained the manner of a proper stream offering countless possibilities.

Sticking with the dry/dropper combo — it was too much fun to not try a dry — I found a long run of riffles that again offered the shelter of a fallen log. Shadows darted after my fly as it rushed downstream. There was no false casting here, just a quick whip to get the fly back upstream.

Sean and I would leapfrog one another as we explored further downstream. Sean would end up landing more fish, but I daresay that I was one who had the most fun. R. Creek is becoming a favorite place.

We fished another creek, learning after the fact but evidenced by our catching, that it had been hit hard, legally and otherwise, on and perhaps before Opening Day. A detour on the way home secured some half growlers from Snowshoe Brewing Co.

It was a good day. And the next day would be even better for Sean.