We snuck out of the Bay Area on the Thursday a week ago for long weekend, planning to cram a bit of everything into the time we had. 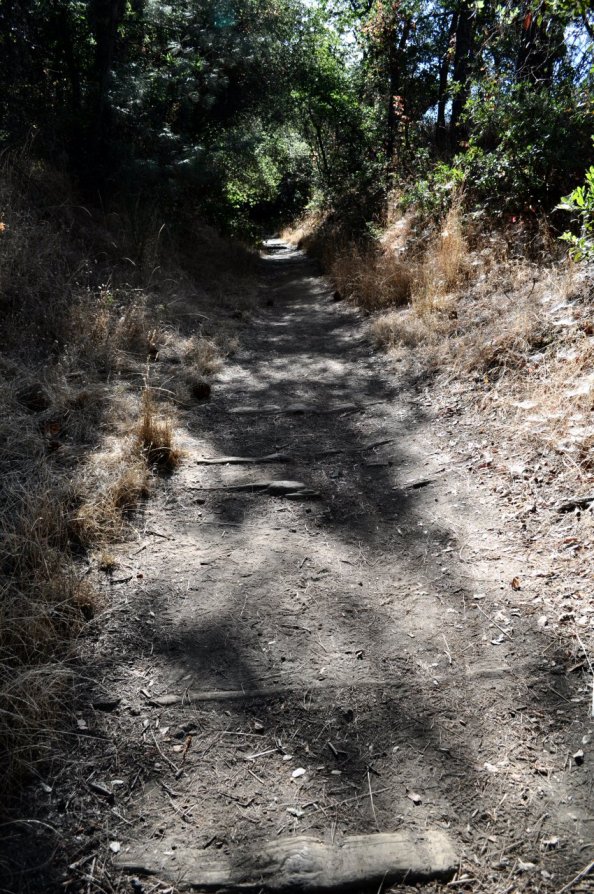 Railroad ties at the West Side Rail Grade trail head.

In a new spirit of exploring unknown parts of familiar territory, we ended up on the West Side Rail Grade the next morning. The trail — really a former narrow-gauge railbed — begins on Buchanan Road in Tuolumne City and is carved into the hillside above the North Fork Tuolumne River, on the north side of the canyon. It was christened in 1898 as the Hetch Hetchy & Yosemite Valley Railroad under the ownership of the West Side Lumber Co., which used narrow-gauge railroads in the Sierra Nevada Mountains until the 1960s. The HH&YV was primarily employed to haul fresh-cut logs from the sugar pine forests of eastern Tuolumne County to the West Side Lumber Mill in Tuolumne City.

The trailhead is just outside of town, and the first 100 yards are marked by decomposing railroad ties that look like worn steps. After that, most of the trail is exposed, which left us to bake in a remarkably hot morning sun. There are a couple places where benches and tables allow for a break in the shade, and a sprinkling of poison oak along the trail encourages one to stick to the well-worn path.

Though I’m not a history buff, per se, it’s a pleasant surprise to find remains of history in situ. About a mile down the trail we came across long portions of ties and rails, with the trail occasionally shifting from one side of the tracks to the other.

The grade slopes gently downward, at least for as far as we hiked, and it would be a great place to break in some new boots. Had we continued the full 4½-plus miles, we could have soaked our toes in the North Fork of the Tuolumne River, near Basin Creek. (I originally discovered part of the West Side Rail trail while exploring Forest Service land above Long Barn, and while fishing an upstream portion of the Tuolumne, but have since determined that was another section of the trail that stretches from Hull Creek to the Clavey River, that that’s another hike for another time.)

We met a few folks along the way: an overachiever who was jogging uphill and a few women who walk it almost every day, one of whom had made a dramatic move from the northern California coastal town of Bolinas to the much drier Sierra foothills.

With the full heat of the sun soon approaching, we left the exploration of a last blind curve for another time, and headed back. This day we had the dog with us and I don’t know if it was he or I who was panting more in the heat.

I have a feeling, though, that we’ll see more of this trail in the spring.

Railroad ties at the West Side Rail Grade trailhead. 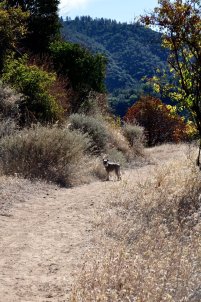 Nevada waiting. I think he was always 10 yards ahead of us. 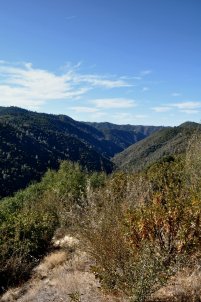 Looking downstream (west) from the West Side Rail Grade.

Erosion threatening to dismantle part of the HH&YVRR. 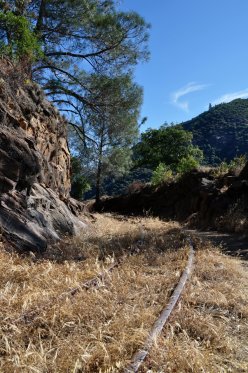 The last bend before he turned around. “I’ll be back.”

2 thoughts on “hiking through history”