“We’ve been busy…” would be the applicable excuse to explain the lack of posts here, and it’s true in more than one way. The nose has certainly been to the grindstone, but thankfully interrupted by (multiple) visits from out-of-state family rarely seen south of the 47th parallel, too much food, copious beer tasting, and the celebration of one of those big steps down the path of life. The yard lies ignored.

Another road trip begins in just over 24 hours, an annual trek that’ll put us in the middle of a pretty fishy — and pretty — spot east and a smidge south of Yosemite. We’ve fished there before quite a few times, but this year, conditions seem to be a couple weeks ahead; more of what might be expected later in the month. The upside is that a small river not visited before may be a prime candidate this year.

At any rate, life’s been good lately, and now that we’re on the downhill slide into the holidays it’s hard to believe another year is closing fast.

My parents celebrated their fiftieth wedding anniversary last weekend. They didn’t want a big bash, but wanted the family to get together. And, for the first time in quite a few years, we gathered, with my wife and I, and my sister and her family, flying from San Francisco to Seattle-Tacoma International. Being short on vacation time it was a quick trip for us, flying up Friday and leaving Sunday. 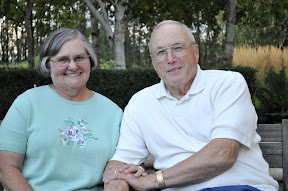 The reason we all gathered in Duvall, Wash.

It was the type of low-key celebration that is more common in my immediate family (except, maybe, for my brother). It started Saturday morning at mom and dad’s house with a get-what-you-want breakfast. There was a lot of catching up and joking around. The nephews got reacquainted.

About mid morning, dad presented mom with an anniversary gift; a communal effort that brought together a heartfelt quotation chosen by dad with a cross-stitch put together by my wife, with the matting and framing coordinated by me. Yes, tears glistened in mom’s eyes, and dad’s voice crackled during his presentation.

That afternoon, in typical Konoske fashion and joined by my wife’s parents, we continued the celebration with a hearty “main meal.” (I’d call it either late lunch or early dinner, as the rest of the family well knows by now.)

At Sunday morning mass, mom and dad’s marriage was blessed at Holy Innocents Catholic Church, with the family in attendance. It was nice, and like our parents, low key. After mass and before some of us had to leave, we enjoyed too much breakfast at Duvall Grill.

But I do think I heard something about mom being up for sainthood.

Below is a slide show of photos from the weekend, or you can visit the album here.

I had expected my previous post would be the last regarding my summer trip to the rural side of the family, but I did cram in a bit more fun. So, we’ll wrap it up today.

I had certain designs for this trip and can happily report they were fulfilled.

Except for the fishing, I really didn’t put any preplanning into the other days I’d be in the Evergreen State. But there were two goals nestled in my subconscious.

Top of the list was reinforcement of my Cool Uncleness. I won’t lay claim to being the first guy to publicly acknowledge a premeditated goal of becoming The Cool Uncle. And nowadays an Internet search will yield copious advice on how to become a cool uncle. I feel, however, that while one can study cool uncle strategies and tactics all day long, but it means so much less if it doesn’t bubble up from the heart.

Only the ‘phews can gauge my success, but I can honestly say that, at the very least, I’ve given them memories that shouldn’t vanish for quite a while. Just ask Nick and Nathan about the crazy snow dance.

Tuesday allowed me to fulfill the second goal: securing Encores direct from Boehms Candies in Issaquah. It’s a tradition: never return home to The Wife without Encores in hand. Not a bad deal, considering I get to enjoy some as well. I’m a bit worried, however, that this custom may soon loose some of its allure. My sister-in-law mentioned that occasional one can find Encore on sale at a local grocery store. On the other hand, there’s that extra bag of Boehms’ chocolates that enviably finds its way into the trunk, only to disappear during the next two hours or less.

Hmmmmmm...wonder what happens if I turn the key?

That evening offered an opportunity to do the uncle thing at the National Night Out celebration in Monroe. I met up with my brother, his wife and the nephews to view the various organizations and demonstrations. There were two highlights: a water rescue and my brother showing the young ‘uns how it’s done at the U.S. Marine booth.

What style, what grace.

It seems that the carrot works better than the stick when it comes to Mark. The Marines were offering various trinkets to folks who could complete five or so pull ups. But for Mark, it was all about the hat. I don’t recall the precise number of pull ups required to win the hat, maybe 12, but it was a count higher than most men over 40 might finish without straining something. There was a particular coolness and grace to Mark’s pull ups; the shades, a tilt of the head, and the extension of the belly as a counterbalance. He did get the hat.

My last full day started as usual with breakfast with the folks. My sister-in-law graciously volunteered to pick me up and drop me off to see a movie, the picked me up to spend more time with the nephews. Little did I know, the nephews swore off playing any video games until I could play with them. (I think that shows some dedication on their part!)

I was a bigger gamer back in the day, and still dabble now and again. However, that afternoon we were playing Super Mario, a game that arrived on the scene long after I had moved on to first-person shooters. But as with anything habitually practiced, gaming muscles seem to have a memory. Soon I was keeping pace with these half-pints and we were all having a good time. Then an opportunity arrived to ratchet up the Cool Uncle factor.

Don’t ask me the level we were playing ‘cause I don’t know; but it was difficult. After a few attempts to get through, Levi was knocked out of the game. Kaden and I were trying to climb our way up, jumping from moving stones to swinging platforms and through zombies. Kaden’s character fell to his virtual death. Four eyes were flitting back and forth between the television screen and this uncle from California. Sweat beaded on my brow. This was no time for button mashing. With great deal of skill, I completed the level to an exclamation of “Awesome!” from Levi and “That’s what I’m talking about!” from Kaden. I think Kaden was even more excited when he discovered that the newly opened level was underwater, where he could swim his character while fending off fish and avoiding huge scallops.

I figure this is a memory that will stick around for a while. At least until another Cool Uncle memory comes along. A nice thing is that this coolness goes both ways. I’ve got some pretty awesome memories of time I’ve spent with nephews. (If you’ve noticed, I’ve not mentioned nieces. I don’t have any.)

The afternoon faded away. The nephew’s dad returned from work. We loaded everyone into the truck and it was off to a last dinner out with the folks and my brother’s family at one of the many fine family dining establishments in Duvall, Wash.

My PNW vacation is over. Family were visited, friendships started, fish sought and some caught. In between there was beer, uncle time, time to myself, and general re-acquaintance with the place.

Thrust back into the routine, I’ll be back at work today, and have the weekend to recover, in between yard work and car washing. In the rear view mirror are great memories that began a week and a day ago.

This trip was marked with my first experience flying with fly fishing gear, including two rods and matching reels. Despite worries that TSA personnel might consider fly line a strangling risk, not once did I have to submit to questions or a strip search of any kind. I did, however, leave desiccant (a white, nondescript powder to non fly fishers) at home to avoid the whole anthrax issue.

The retired folks who raised us took time out of their busy schedule to provide transport to my lodging, which, funny enough, they also provided, and without any hint of compensation. (We’ll get back to that.) I’d love to say that Mother Nature welcomed me to Seattle with blazing sunshine, but, well, it’s Seattle: overcast and gray. I interrupted the ride home with a stop for lunch in celebration of Mom’s birthday. My brother and his family, in a surprise appearance, joined us. It was a fun family meal.

The first beer I've met that I didn't like.

That evening, thanks to wifely permission, “little brother” Mark and I headed out for a bit of a beer adventure. I’d like to say that I never met a beer I didn’t like. That’s no longer true after our experience that evening with a flight at a local bar and grill. Of seven beers, we deemed only one barely acceptable for our palates. And we’re not beer snobs. Thankfully, it was the time together that mattered more than the beer, and after moving along to another source, we found better-tasting brew. I remember later appreciating that my brother’s wife put out the air mattress, and laying down. That’s it. Sleep came fast.

Next I knew, it sounded as if cartoon characters where running around the house. Nephews Kaden and Levi were up and it was time to begin some “uncling.” I don’t claim any particular knack for this art, but there’s a certain pride that comes with one’s nephews (or nieces, but I don’t’ have any) knowing you’re the uncle. It’s even better when they remember you because of fun times. (Insert comment here about me acting their age.)

Fair is fair, so Mark and I stayed with the boys to allow their mom a bit of away time. As an uncle who grew up when the biggest video game was PONG, it was natural that I’d join the ‘phews in a game of Super Mario. With a timer set to ruin our fun at any moment, we jumped into the game as I struggled to recall how to play; all the while watching the boys go Donkey Kong all over me. Called back to reality by the buzz of the timer, we gobbled down some breakfast and assembled for a walk in the woods along the Skykomish River.

The Nephews at the Skykomish River

If there’s any one thing that I like about the upper King County/Snohomish County area, it’s the easy access to nature, whether woods, rivers or mountains. It was a good time walking on trails in the Al Borlin Park, which parallels the Skykomish. A good place to get some fresh air, throw rocks into the river and just be outside. Also an opportunity for an uncle to show off his mad rock-skipping skills.

We closed the day with a late and long lunch at the folks’ place.

Then it was time to hit the sack early. Alarms were set for 3:30 a.m. in anticipation of Saturday’s salmon fishing. For some of us it would be fishing, hooking, but not landing; but that’s the next post, which should be number two of three.