I was reminded of my childhood when the ship began to dock the third morning of our Alaskan cruise. Years ago my sister and brother and I, still sleeping, would be packed into the car, and we’d wake us up numerous miles down the road. This time it was our captain announcing the successful mooring of the ship and clearance to disembark passengers. 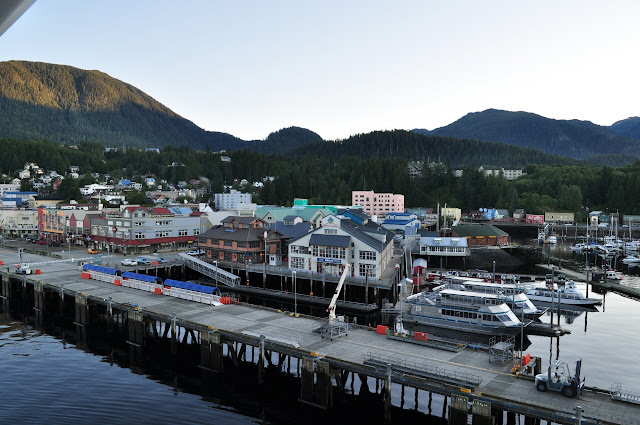 Ketchikan greeted us with sunshine and colorful waterfront shops. The rest of the town huddled between mountains and the sea. Our half-day shore excursion would take us to visit the Deer Mountain Tribal Hatchery and Eagle Center, the nearby Totem Heritage Center, the Saxman Village and the Southeast Alaska Discovery Center.

Though it’s no secret that Ketchikan, as well as Juneau and Skagway, owes much of its financial survival to tourism, our guide/driver that morning exemplified the tourist-friendly attitude that would greet us during all of our on-shore travels. 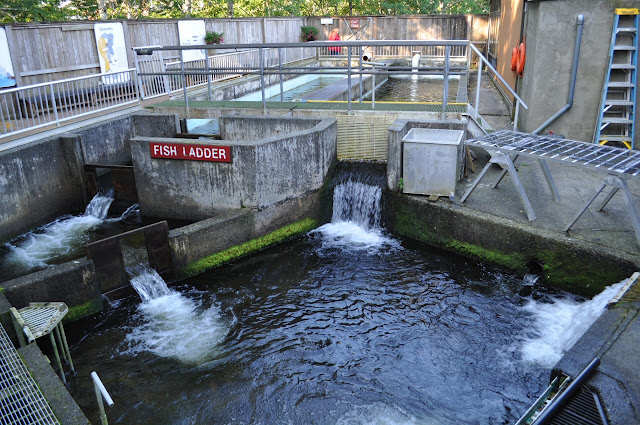 The collection area for salmon returning to the Deer Mountain Tribal Hatchery.

The Deer Mountain Tribal Hatchery and Eagle Center is within a relatively easy walk east of the dock. Our guide walked us through a town park to the entrance of center, next to a creek in which numerous pink salmon milled about. We were greeted by a docent and resident owl, and entered the eagle habitat. To be honest, I was hoping for something, well, a bit more. However, it did offer an up close look at two of these amazing birds, which haven’t been released into the wild due to injuries. A creek running through the small habitat allows them to hunt spawning salmon.

The Deer Mountain Tribal Hatchery is just as small in keeping with its mission to ensure the survival of various salmon species rather than supply fish for a fishery. Its operation was well described by the docent, though the distraction of big salmon in a holding pen interfered with my hearing everything she had to say.

Perhaps more remarkable was the Tlingit and Haida totems, moved from islands throughout the Inside Passage and now housed a short walk away in the Totem Heritage Center. The unrestored appearance of the totems housed in the center — each 100-plus years old — lend a sense of history. Small, surrounding exhibits cover Tlingit and Haida history and traditions. 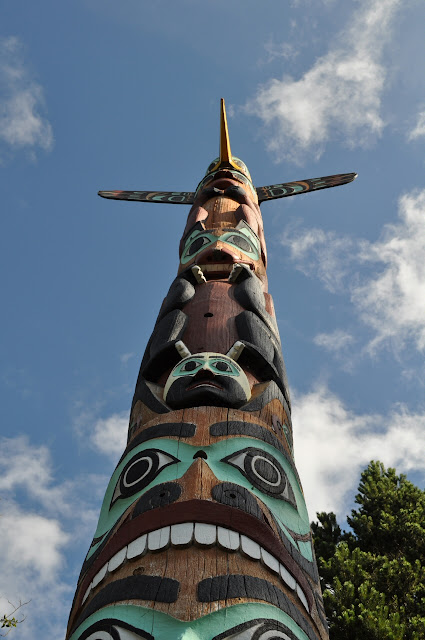 Totem in Saxman Village on a nice sunny Alaskan day.

We next visited Saxman Village, a tour highlighted by a carving demonstration and nearby totems. Of note is the Seward Shame totem built to shame the former U.S. Secretary of State for not repaying a Potlatch (a gift-giving festival) to the Tlingit people. While the color red is used to indicate shame, indicating stinginess, red also figures prominently on the nearby pole built out of respect for Abraham Lincoln* and commemorating the U.S. Revenue Cutter Lincoln in its role in helping two rival Tlingit clans establish peace.

Back in downtown Ketchikan, we were dropped off at the U.S. Forest Service’s Southeast Alaska Discovery Center. Worth a visit, the Discovery Center offers displays and information covering a wide swath of the area’s natural and human history, and might have offered a better starting point.

Lunch in Alaska is simple for me: various versions of halibut fish and chips, this time in view of Ketchikan’s Thomas Basin Harbor, at the south end of town.

We’d been warned that all three of our ports of call had been invaded by jewelers who typically started their businesses in other, more tropical cruise ship destinations. My wife, in fact, already wanted to look at a particular ring.

We oohed and ahhed along while strolling diamond row, picking up a few of the compulsory t-shirts along the way. Our last stop was to see “The Ring.”

I hadn’t been warned about the sales folks. They are smooth and slick. It all starts with an innocent question: “What do you think the price is?” Let’s just say it was too much, even with the initial offer of a discount, but it must have been apparent — in our eyes or maybe our body language — that we had no plans to buy. Another substantial discount raised my eyebrow. 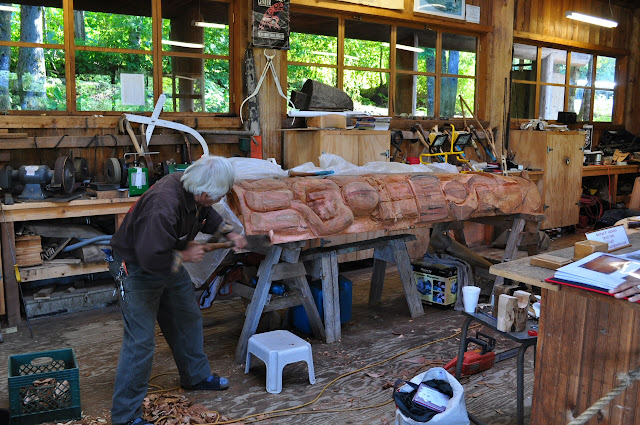 Carver at work in Saxman Village. (A totem carved by a master carver can cost up to $4000 per linear foot.)

I’m terrible at picking out jewelry and recently began an early search for a suitable ring for our 10th anniversary, which is not too far off. I was having a heck of a time. But again, I went into a defensive huddle with my wife, shaking my head with such exaggeration that another offer was made. Earrings were thrown into the deal. The sales manager stepped up with calculator in hand. I’d even go so far as to say we had the original salesman sweating, just a bit. Another huddle, another offer, the incorporation of sales tax into the offered price, and a deal was struck.

I was hoping to see ice in Alaska, and I thought it would be in a glacier, but regardless of the profit earned on the sale, we walked back to the ship feeling we’d done okay.

* This one is different from the Lincoln Totem in the Alaska State Museum.